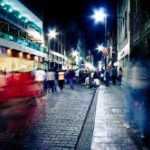 A rocknroll band, The Winners, is down and out. During a road trip, their humdrum image radically changes when their bass player disappears one night with a hip vampire. She emerges with a sexually charged charisma that drives the audiences wild. As the band members succumb, one by one, to blood lust, their gimmick launches them into the limelight, and they soon hit mega-stardom beyond their wildest dreams. Meanwhile, legendary vampire hunter, Eddie Van Helsig, is tracking them down, despite his fear of the dark. When a veteran music producer calls them on becoming a vampire freak show, they begin to realize that fame is not what its cracked up to be.