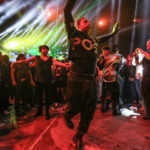 Valentine and Proteus are best friends, until they fall in love with the same girl. Having travelled to Milan in search of adventure, they both fall for the Dukes daughter Silvia. But Proteus is already sworn to his sweetheart, Julia, at home in Verona, and the Duke thinks Valentine is not good enough for his Silvia.
With friendship forgotten, the rivals affections quickly get out of hand as the four young lovers find themselves on a wild chase through the woods, confused by mistaken identity and threatened by fierce outlaws before they find a path to reconciliation.
Simon Godwin makes his RSC debut to direct Shakespeares exuberant romantic comedy. Simon is Associate Director of the Royal Court. His production of Strange Interlude recently played to critical acclaim at the National Theatre.
This is the first time in 45 years The Two Gentlemen of Verona has been performed in full production on the Royal Shakespeare Theatre stage.