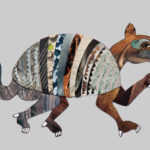 Mark Lewis, assistant cameraman at a London film studio, aspiring movie director, part-time taker of pornographic pictures, and amateur documentary film-maker, has begun murdering women. He kills them, literally, with his camera and films the attacks and the murders. He also surrepititiously films what he can of the police investigation. At night he carefully screens and edits the footage. This is his great documentary, his lifes work. Mark leads the police closer and closer so that he can film the denouement, his own imminent capture and suicide.