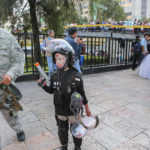 A metaphysical splatter film that was praised by Susan Sontag as one of the 10 most important films of modern times, Begotten is a very grainy, often powerful work of experimental cinema which seems to land somewhere between David Lynchs surreal Eraserhead and James Broughtons heavily symbolic Dreamwood. The film opens with God Killing Himself: a man in rags slicing into his own belly as he spews dark fluid and oozes filth. Mother Earth emerges, or is born, from this excoriation and travels to a primeval forest. There she gives birth to Son of Earth-Flesh on Bone: a quivering man-child. The two are found by a tribe of faceless, druid-like figures dressed in rags, and though mother and child are at first revered, they are finally tortured, dismembered, and buried by the tribe. From their grave, life begins, and flora emerges from the wasteland. Filmed on black & white reversal film and then re-photographed onto a black & white negative, E. Elias Merhiges stark, grainy images of a squirming, oozing, mythical Creation are not easy to digest or to forget. Merhiges own experimental theater troupe, Theaterofmaterial, performs throughout.~ Anthony Reed, All Movie Guide