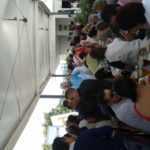 Set in the Middle Ages, Azur and Asmar is the story of two boys raised as brothers. Blonde, blue-eyed, white skinned Azur and black-haired, brown-eyed, dark-skinned Asmar are lovingly cared for by Asmars gentle mother, who tells them magical stories of her faraway homeland and of beautiful, imprisoned Fairy Djinn waiting to be set free. Time passes, and one day Azurs father, the master of the house, provokes a brutal separation. Azur is sent away to study, while Asmar and his mother are driven out, homeless and penniless. Years later, as a young adult, Azur remains haunted by memories of the sunny land of his nanny, and sets sail south across the high seas to find the country of his dreams. Arriving as an immigrant in a strange land, Azur is rejected by everyone he meets on account of his unlucky blue eyes, until finally he resolves never to open those eyes again. The once-beautiful child clad in gold is reduced to a blind beggar. Yet, blind though he is, little by little and step by step, he discovers a beautiful and mysterious country. Meanwhile, back in her homeland, Azurs nanny has become a wealthy merchant and Asmar has grown into a dashing horseman. Reunited but now as adversaries, the two brothers set off on a dangerous quest to find and free the Fairy of the Djinns.