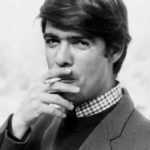 The great Mississippi flood of 1927 was the most destructive in American history — 27,000 square miles were inundated. The migration fueled the evolution of acoustic blues, including artists who witnessed the flood such as Charley Patton and Memphis Minnie, as well as influencing electric blues bands that thrived in cities like Memphis, Detroit and Chicago. Archive footage from sources like the Fox Movietone Newsfilm Library and the National Archives is weaved together to document the catastrophe. But the footage was filmed on volatile nitrate stock which is partially deteriorated — the bubbles and washes of decaying footage become associated with the destructive force of the rising river and the celluloid appears to have been bathed in the same water as the images it depicts.