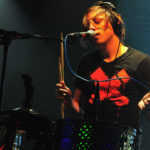 In this tragic tale of misunderstanding, obsession, and increasing madness, she, a beautiful young woman (Isabelle Adjani) settles into a small town in the south of France with her introverted mother (Maria Machado) and physically handicapped father and soon becomes the subject of wild speculation because of her aloofness and at the same time, her obvious sexuality. The young woman is actually caught up in the desire to avenge the long-ago rape of her mother, a rape committed by three Italian immigrants, one of whom is associated with a player piano. An attractive car mechanic (Alain Souchon) is enamored of her, and the woman suddenly sees him in a different light when she learns that his father, now dead, was an Italian immigrant who owned a player piano. Intent on taking action against the mechanics family to right the wrong suffered by her mother, the daughter begins to lose her grip on sanity when she finds out that the men she suspects of the rape are actually innocent. In fact, her father long ago exacted his own vengeance on the three rapists. This knowledge pushes her over the edge, and she has to be institutionalized. Meanwhile, the young mechanic misunderstands what has happened and sets in motion events that cannot but lead to tragedy. LÉté Meurtier garnered four different Cesars in the 1983 competition: Best Actress (Isabelle Adjani), Best Supporting Actress (Suzanne Flon), Best Original Screenplay, and Best Editing. ~ Eleanor Mannikka, All Movie Guide