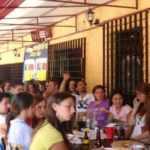 Meera is a club dancer in the dark streets of Mumbai, who like all performers of Mumbai, aspires to be on the screen someday. She gets used by film producers who promise her roles in their films, but fail to do so later. Frustrated, she even thinks of ending her life. But the unexpected arrival of Shyam, a taxi driver, changes the course of her life. He marries her and makes for a lovely husband. Her career also starts looking up as she progresses to being a popular item dancer and then gets cast as the heroine in a film. But, on the day of the preview of her debut film, Shyam is involved in a fatal road accident and declared brain dead. Meera who is left all alone again, thinks of donating Shyams organs to people in need. She wants to have his child through artificial insemination. She fights for her parenting rights as the technique would have created much uproar in the media.