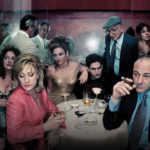 An uneven but entertaining blend of graphic horror and black comedy from John Landis, very much in the mode of the directors successful An American Werewolf in London. French actress Anne Parillaud — star of Luc Bessons acclaimed thriller La Femme Nikita — plays Marie, a lithe and lovely vampire with a conscience who will not take innocent blood and maintains a low profile by dining exclusively on criminals and lowlifes. She finds a virtual smorgasbord in Pittsburghs criminal underworld, arriving in the thick of a bloody mob war sparked by ruthless kingpin Sal Macelli (Robert Loggia). After preying on one of Macellis hoods (Chazz Palminteri), Marie fumbles her attack on the boss himself and he manages to escape, eventually transforming into a vampire himself. Macelli soon comes to appreciate his new superhuman condition and hatches a diabolical scheme to control the syndicates by turning his underlings into vampires — including his beleaguered lawyer, Emmanuel Bergman (Don Rickles). Marie, faced with a new and powerful undead enemy, is forced to take matters into her own claws. To this end she enlists the reluctant aid (and eventual affection) of undercover cop Joe Gennaro (Anthony LaPaglia), whose cover has just been leaked to the press, making him a target for Macelli and his growing army of blood drinkers. Landis has crafted a dark and brooding film, pumped up with bouts of extreme gore and gangland violence — but where American Werewolfs occasional comic touches helped to ground the story and give the straight horror scenes more punch, most attempts at humor here seem jarring and out of place. The films highlights come from numerous horror in-jokes, including cameos from Sam Raimi, Clive Barker, Dario Argento and Linnea Quigley; Rickles explosive death scene ranks among the weirdest in cinema history.~ Cavett Binion, All Movie Guide