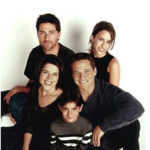 n Los Angeles, Colin Nelson desperately attempts to flee to Bora Bora. Keenly aware that hes in the Tribulation period, his only hope is in a mysterious man named Frankie. In Tokyo, a journalist, Masashi, tries to unravel the disappearance of millions of people as the government closes in on him. In Buenos Aires, Marie searches for her final relative as time runs out. And on a deserted island in the South Pacific, Tom Wiseman, an avowed atheist, attempts to be rescued after his plane goes down.