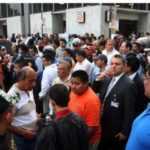 Fiddler on the Roof

Norman Jewisons adaptation of the long-running Broadway musical is set in the Ukranian ghetto village of Anatevka (the film was actually lensed in Yugoslavia). Israeli actor Topol repeats his London stage role as Tevye the milkman, whose equilibrium is constantly being challenged by his poverty, the prejudicial attitudes of non-Jews, and the romantic entanglements of his five daughters. Whenever the weight of the world becomes too much for him, Tevye carries on lengthy conversations with God, who does not answer but is at least more willing to listen than the milkmans remonstrative wife Golde. After arranging a marriage between his oldest daughter Tzeitel and wealthy butcher Lazar Wolf, Tevye is forced to do some quick rearranging when the girl falls in love with poor tailor Motel Kamzoil. Fancying himself more broad-minded than his gentile oppressors, Tevye cannot accept the notion that his other daughter Chava would want to marry Fyedka, a non-Jew. And after shouting the praises of tradition, Tevye must change his tune-and his entire life-when he and his neighbors are forced out of Anatevka by the Czars minions. Topols co-stars include Norma Crane as Golde, Yiddish theater legend Molly Picon as Yente the matchmaker, and Leonard Frey as Motel.~ Hal Erickson, All Movie Guide