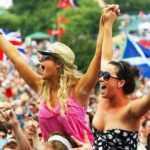 Richard Cheech Marin, of Cheech & Chong fame, directed and starred in Born in East L.A.. Inspired by Marins music-video parody of Bruce Springsteens Born in the USA, the film casts Cheech as an East Los Angeles repairman. While paying a visit to a sweatshop toy factory, Cheech is caught in the middle when the feds raid the place and cart off all the illegal alien workers. Since hes forgotten to bring his own i.d., Cheech is also shipped off to Mexico-where, having next to no knowledge of the Spanish tongue, hes virtually helpless. Desperate, he takes a job with crooked Tijuana saloon owner Daniel Stern-the first of many make-do jobs that he assumes to earn enough money to return home. Along the way, he falls in love with El Salvadorian girl Kamala Lopez, whose English is as fractured as Cheechs Spanish.~ Hal Erickson, All Movie Guide