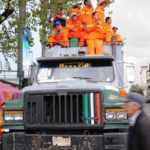 Many people know Docs songs (Save the Last Dance for Me, This Magic Moment, A Teenager in Love, Viva Las Vegas, and hundreds of other hits), but they dont know the man behind the lyrics – and that he suffered from polio from an early age. Though most of his life Doc was confined to crutches and a wheelchair, he lived more during his sixty-five years than others could experience in several lifetimes, working with the likes of Elvis Presley, Ben E. King, Lou Reed, and Dr. John.