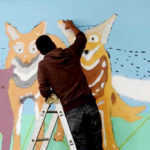 The 113th Congress is widely considered to be the least effective and most divisive body of lawmakers in our nations history. There are fewer laws passed, fewer days worked, more delays and a record number of filibusters coming from a Congress that is not trending in the right direction. Our elected representatives consistently fail to represent our interests, so this film will. By focusing on what Congress members actually say and do once they take their oath to defend the Constitution this film will amuse, enlighten, and possibly enrage American voters– enough that theyll swarm the voting booths in November! They say you never want to see how they make laws or sausages, well its time we take a long look at the sausage factory called Congress.